Get fresh music recommendations delivered to your inbox every Friday.

from Wisconsin River by Chris Richards 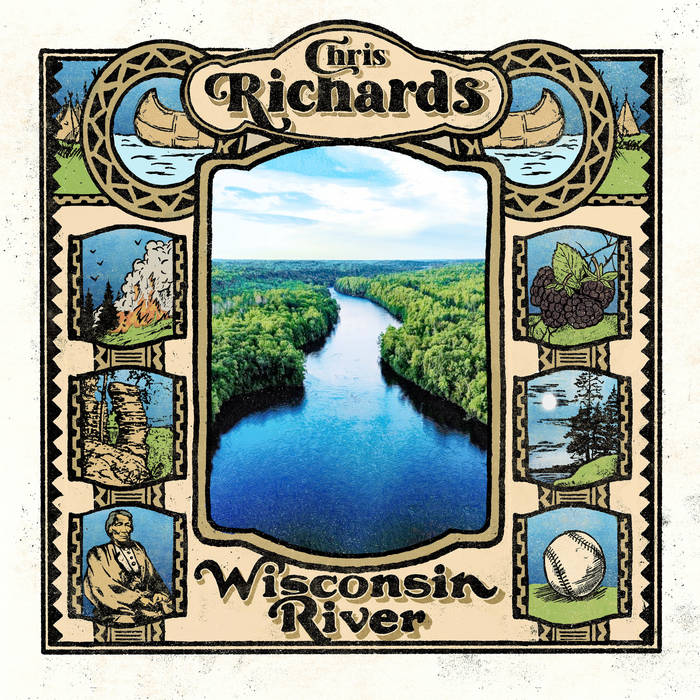 Late in the summer of 1959, American baseball pitcher Satchel Paige arrived in Sparta, Wisconsin (pop. 6,000), for a game against the Sparta city team. “Satch” had long been one of the game’s greats and premier showmen, and at that point in his life he was what you would call a freelancer, a sort of fastball-wielding soldier of fortune. His allegiances were so slight that on the mound that night he wore an old, tattered grey uniform with “Chicago” across the front despite his team being the Havana Cuban Giants.

Satchel had done this—barnstorming—much of his life to earn money during the off-seasons, following the sun and the money out west, down south, and into Mexico and the Caribbean. No player barnstormed as far or wide, or for as long as he did.

But that hot August night, he was in Sparta. And the opposing pitcher was my dad. After the game, as photos were being taken, 21-year-old Billy Richards asked him, “How old are you, Mr. Paige?” “Billy,” he said in a deep Alabama drawl, “I’m between 50 and 80.” Satch told many dubious stories, but that one was true. He was 53. And he wasn’t near done. Six years later (!), he became the oldest player to appear in a major league baseball game.

It was a summer night in Sparta, Wisconsin, so hot, it ached to breathe
A robin’s-egg-blue Cadillac came floating down the street
It slowly slid right past us, with its windows partly down
Playing “Kansas City, Kansas City, here I come”
Driving was Leroy “Satchel” Paige, the Negro League baseball star
We followed him to the buzzing crowd down at Memorial baseball park
He’d come from many miles away to storm our Coulee barns
To mesmerize with his fastballs and his Alabama charm
The city team took the lead with young Billy on the mound
We peeked into the dugout to see Ol’ Satchel nodded out
Then at the end of 3, he finally stood and grabbed his glove
A murmur spread through the bleachers, and then a cheer went up

Satchel came to Sparta in 19 and 59
He was north of 50, and two decades past his prime
They still tell the stories of the numbers that he fanned
All across the dusty diamonds of the Dairyland

Satchel shuffled to the mound like he was already out of gas
Rationing every movement like each step could be his last
But when he took that baseball, boy, his youth came rushing back
He leaned forward, reared a bit, then he slung it by their bats
He threw the Looper, and the Drooper and the Whipsy-Dipsy-Do
The Eephus pitch, the Trouble Ball, the Bowtie and the Screw
It was “Tusser”, Nowak, Herman, first, then Kowitz, “Red” and Spink
The old man had them knotted up and then off the field they’d slink
Mosquitoes swarmed onto everything, but no one seemed to care
Before them worked a legend, there was magic in the air
And once Spinky’s little bitty dribbler had been put away with ease
Satch doffed his hat and mopped his sweaty forehead with his sleeve

When the game was over, he signed cards for all kids
Their dads took pictures of him while they told him things he did
A couple of us walked him out to that robin’s-egg-blue car
Said, “Come have a beer with us, Satch, down at Emma’s Wonder Bar”
He said, “Na’… I appreciate it, I’ll have’ta catch you next time, Bo
Another town’s a-waitin’, and there’s a long, long way to go”
“They say you’ll pitch forever, Satchel, can that really be true?”
“Now, boys, what else is a colored man from Mobile gonna do?”
Then the Cadillac floated back down the street and out of sight
To another town, another town, another town, goodnight

Satchel came to Sparta in 19 and 59
He was north of 50, and two decades past his prime
They still tell the stories of the numbers that he fanned
All across the dusty diamonds of the Dairyland

Chris Richards is a critically acclaimed songwriter and recording artist from Sheboygan, Wisconsin.

Bandcamp Daily  your guide to the world of Bandcamp

Nightmares on Wax and Bremer McCoy stop by with their sublime new LPs.